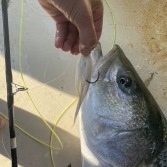 Has anyone fished Saint Martin