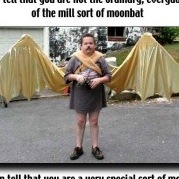 Too Few To Start a Country, Too Many For An Insane Asylum