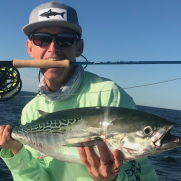 What's everyone tying for this years saltwater!?

86 posts in this topic