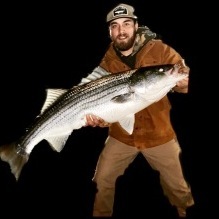 Is The Wife Accepting of Your Fishing??

Started by SJ from the Bay, January 7