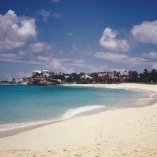 You're right, Trump is not Presidential material