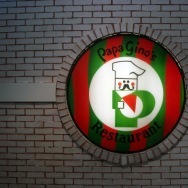 Canal Rod - Did i make a mistake?

Started by Papa Ginos, May 12