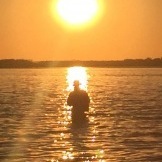 WHAT WOULD YOU DO/SAY- if anything? Anglers Cutting up Short Fluke on Rocks for Bait.