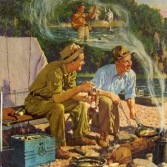 The Google conspiracy the MSM may just let slide by