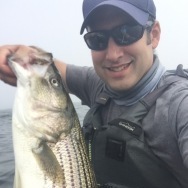 Fly fishing from the kayak (seated)