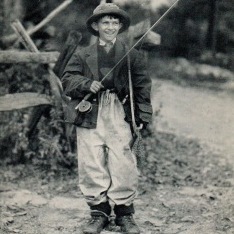 WHAT WAS YOUR FIRST PAIR OF WADER OR HIP BOOT?