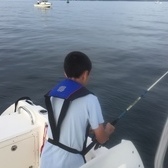 Fishing by boat- alone or with others?